The Pueblo West Women's League, a service organization that supports Pueblo West's various community efforts, recently donated a sculpture to the community that is meant to honor the community's first responders.

The sculpture, coined 'Every Day Responders' is the seventh piece of artwork that the league has donated to the community as a part of the Let's stART campaign that league president, Barb Murfit started in 2011.

Murfit said the first six pieces are representative of plants and animals native to the area but the newest piece, which went up this month, is a tribute piece.

"The first one was flowers on the prairie, then we have geodes, an eagle that soars, tortoises and a fish sculpture," Murfit said. "Then the committee and I decided for number seven, we should include some people.

"(The seventh) is a sculpture of an EMT, a sheriff and a firefighter. We wanted to honor our local heroes, so our timing was good on that one." A goal of Let's stART, Murfit said, was to solicit the work of local artists to beautify high traffic areas.

'Every Day Heroes' is the second piece of artwork donated by artist Eric McCue, and he explained that creating a piece in honor of the first responders was a happy coincidence.

McCue said that when looking for a location for the next piece, the league had mentioned placing it between the sheriff and fire station.

Murfit said the intention and placement of the sculpture was ultimately to give a shout out to Fire Chief Brian Caserta and Sheriff Dave Lucero for their hard work and dedication to the community.

Then, once the pandemic hit, it was only fitting to morph the piece into an honorary piece for all first responders.

In light of current events that took place over the last year, McCue said there was a specific inspiration he had when creating the piece of art - unity.

"I try never to make art that you need 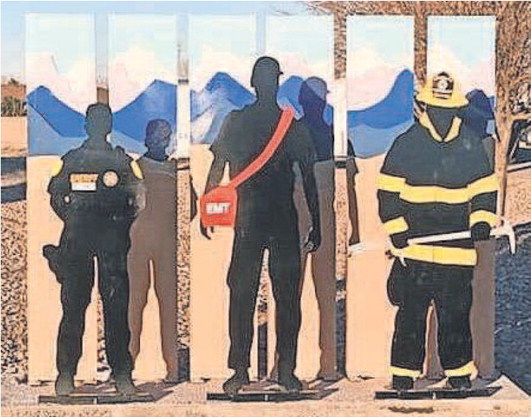 "Every Day Heroes" stands 7 feet high, 10 feet wide and 3 feet deep and honors first responders: EMT personnel, fire and sheriff. It's located on East Joe Martinez Boulevard between the Pueblo west sheriff substation and Pueblo west fire department. The sculpture was created by Eric McCue of Iron E Art and Fabrication and is the seventh sculpture donated to the community by the Pueblo West Women's League. COURTESY

Continued from Page 1A

an art degree to fully understand it," McCue said. "So, I think it was very important to make it gender neutral and race neutral. I wanted it to be something to embrace the Western attitude of all generations and races.

"To me, it's a simple sculpture honoring what first responders and even essential workers are doing. It has been a crazy year, and without them we would be in far worse situations." The newest sculpture was placed in between the Pueblo West Sheriff's Substation and the Pueblo West Fire Department on E. Joe Martinez Blvd.

'Every Day Heroes' is the most expensive project the league has donated, Murfit said, costing around $10,000.

McCue said b local vendors D&S Paint and Midwest Fabrication & Steel were key contributors in making 'Every Day Heroes' a reality as they provided supplies and kept the cost within the budget McCue was given.

Chieftain and Pueblo West View reporter Alexis Smith can be reached by email at asmith@chieftain.com or on Twitter @smith_alexis27.

"To me, it's a simple sculpture honoring what first responders and even essential workers are doing. It has been a crazy year, and without them we would be in far worse situations." Eric McCue creator of 'Every Day Responders' sculture

Click here to see this page in the eEdition: